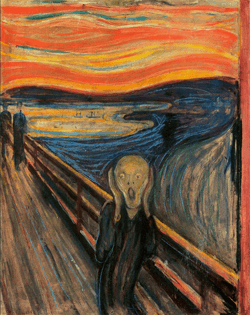 In this story from Vísir, we learn that during a recent cleaning the world-renowned painting The Scream by Edvard Munch was discovered to have, well, bird shit on it. Apparently a small white spot on the shoulder of the screaming figure was determined to be a contribution from an avian critic.

Art historians claim that the finding comes as no surprise to them, as Munch was known to let his paintings sit outdoors for several days once he had completed them. In this manner bird droppings have found their way onto many of his other works. The main topic of debate now is whether the stain should be considered part of the painting and left alone, or whether is should be removed.

Let’s look at the first paragraph and some vocabulary to help with the entire article:

“When the original copy of the world-renowned painting The Scream, by Norwegian artist Edvard Munch, was cleaned last week it came to light that a small white spot on it was bird dung.”

One interesting verb in the article is:

“Munch always let his works sit outdoors for a few days after he had finished them.”

*Note that ljúka takes the dative.

There’s an interesting expression in the second paragraph meaning “to take by surprise” – koma einhverjum í opna skjöldu, with the reference to a shield. It’s kind of like “catching someone with their guard down”. You might be familiar with koma á óvart as another expression meaning “be surprised”:

Það kom mér á óvart. – That surprised me. / I was surprised by that.

“The Scream exists in four editions, one of them selling at auction for 13 billion krona last year.”

Personally I think they should leave the crap where it is 🙂