I always love when I find stories that not only teach me new Icelandic words, but also something new in general. I had never heard of these “Witches’ Rings” as I translated it from Icelandic. They apparently have many names in English, like Fairy Ring/Circle, Elf Ring/Circle or Pixie Ring. It also turned into a mini botany lesson, specifically centered on mushrooms 🙂

The article that first caught my attention was this one from RÚV. It contained pictures as well as a link to a page on Vísindavefurinn, a very cool site which has featured in previous posts, which explained how these rings form. I took the first paragraph from this to translate, and if you click through to the RÚV article the first paragraph of that is very similar, and the rest of the article not too tough. It talks about how a farmer took the pictures while on a sheep round-up, and thought it might have been caused by the sulfur pollution from Holahraun. 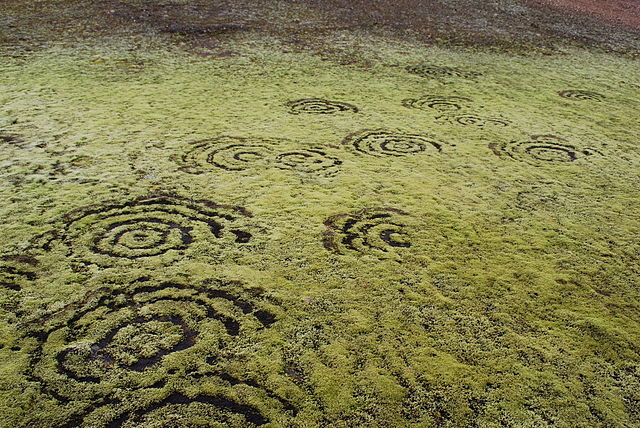 So-called witches’ rings or mushroom rings form due to the influence from mushroom hyphae which lie in the soil under the moss, and cause the moss over the mushroom to grow poorly or even die. Then a ring of dead or sick moss is seen in the moss patch. On the ring or by it grows the long mushroom cap and is the only part of the mushroom visible. However it is usually only seen for a short time, and so the ring is usually capless. Thus it can be difficult to determine the type of mushroom in question.

The verb vaxa is wonderfully irregular, if you’ve never seen it before 🙂

When referring to the parts of the mushroom, I discovered that þráður referred to something called a hypha, a filament-like structure that emerges from a spore during the mushroom life cycle. A spore, by the way, is gró in Icelandic. The cap of the mushroom is aldin in Icelandic, which is also a word for fruit.

Here is some vocabulary for the above, as well as for the RÚV article: