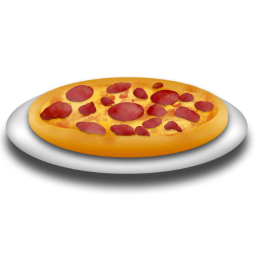 It’s not always easy to find short, simple news stories that can be tackled at a beginner level, but this one is pretty good. Just a few short sentences, only a bit of tricky grammar and some basic vocabulary. I’ll go through it line by line, and try to comment on the potentially confusing parts.

I’m guessing from the capitalization that Pizza House (Hut?) is the name of the restaurant and they aren’t just talking about a pizza shop in general.

So don’t be freaked out by væri, it’s just the subjunctive of var. When relating information, i.e. something that somebody else said, the subjunctive mood is used. It’s a topic for an entire post (or two) in itself that I’m sure I’ll get to someday 🙂

Tilkynnt is actually a participle of the verb tilkynna; it’s the other way around in English with was reported. If a phrase seems confusing try a different word order, sometimes it will become clearer.

When police arrived on the scene a great deal of smoke was coming from the building. Firemen went inside and discovered the source of the fire.

The phrase koma á vettvang pops up a lot in news stories, meaning arrive on the scene. In the second sentence, translating it literally helps, so the firemen went inside, and saw where the fire had its source.

The manager of Pizza House had lit the oven not realizing that there were empty pizza boxes inside, which caught fire.

When lighting something on fire, kveikja often takes í + dative, but I’m not sure what nuance upp adds here.

Maybe the trickiest phrase is here at the end, with the phrase að átta sig á. It means to understand, realize, and takes the dative. In this sentence it’s það that is in the dative as því.