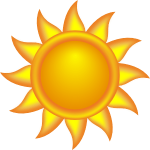 It sounds like last month was the sunniest March in over a decade, according to this article on Vísir. There are several sun and weather related terms in the article, and it also provides a good opportunity to mention one of the more interesting (or challenging) aspects of Icelandic – compound words. Now if your native language is English, compound words are nothing new. But they are probably more common in Icelandic and you might not recognize them right away if you are just starting out. If you speak German you probably have no problems whatsoever 🙂

The title of the article contains two compound words:

The word for sunny combines the word for sun (sól) with the adjective for rich (ríkur). Then “the month of march” is expressed as one word – mars·mánuður. You could replace March with any other month and use it similarly.

The word used for measuring is að mæla:

“Precipitation in Reykjavik was measured at around 41 millimeters and is about half of the average for March. The last time March was this dry was 2005.”

Be careful not to confuse að mæla with the verb that looks the same but means to talk or speak – they conjugate the same way in the present tense, but the past tense has -t- endings instead of -d-. It’s usually pretty clear from the context which meaning is intended.

Another word used in the article is sólskinsstund, which I guess is a triple compound 🙂 It contains the words for sun (sól), shine (skin) and time (stund).

The verb for shine has an interesting conjugation:

So if you come across a word that isn’t in the dictionary, look closely to see if it might be a compound word. Then break it apart and look up each word separately, and see if you can figure out the meaning of the compound.