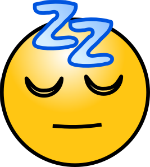 Police were called to a house in Hafnarfjörður when a woman heard strange noises coming from the bathroom where her son had gone in to take a bath. It turned out he had just fallen asleep and was snoring 🙂 While the story was amusing, what I found interesting was the time it was said to have happened – kaffileytið. I had never seen this before…when is coffee time?! Because I honestly thought it was always coffee time in Iceland 🙂

Police assistance was sought at a house in Hafnarfjörður yesterday. A young man there had gone in to take a bath, but his mother was concerned when a strange noises started coming from the bathroom.

In the title of the article, vöktu could actually be the plural past tense of two different verbs – but the one you want is vekja. In addition to áhyggjur, you might often see it with athygli (attention).

So kaffileytið…I’d really like to know what time of the day that typically is 🙂 The suffix -leytið is used a lot when expressing time – it adds the meaning of around. So um sjöleytið means around 7 o’clock.

She tried to go in but the door was locked, and neither knocking on the door or her shouting seemed to get get his attention. So she called the police.

Be aware that dyr (door) is always plural in Icelandic, but there is another word for door – hurð:

This sentence also contains a good example of the phrase hvorki…né – neither…nor.

Two policemen were sent out immediately, but shortly before they arrived on the scene word came in on the radio that the danger had passed and the matter was resolved.

As is often the case there was a simple explanation. The boy had fallen asleep in the bath, and the sound that was heard coming from it turned out to be the young man’s snoring.

Not completely sure about eins og stundum áður, but I couldn’t think of a better translation.