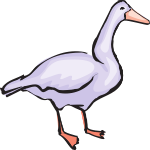 Goose hunting season is underway in Iceland, except for some parts of the eastern region where it will be delayed for a couple more weeks due to the late start of nesting earlier in the year. There is a related article on RÚV to check out – sometimes it’s interesting to compare stories from different sites. Often I find there’s information in one that answers some questions I had about another 🙂

Hunting season for the Greylag goose and the Pink-footed goose begins today, the 20th of August, and lasts until March 15 according to information from the Environmental Agency of Iceland.

Ooooh, a nice 4-part compound to get things started… 🙂 You could break down goose hunting season as gæsa·veiði·tíma·bilið.

I think I finally got over my problem of always thinking sea when I would see the letters haf 🙂 Here hafið comes from að hefja – to begin.

Technically it’s the past participle, which is treated just like an adjective.

According to the agency’s information, the egg-laying began rather late this year and for that reason the start of the hunt has been delayed in the eastern region of Vatnajökull National Park until September 1st.

The verb að seinka (delay, postpone) takes the dative, which is why you see the form upphafi – the thing that is being delayed. It can be tricky picking sentences apart sometimes to figure out what the heck is going on grammar-wise.

Ordinarily hunters wait to hunt geese there until September, especially in light of the fact that it is then also permitted to begin catching those duck species which are hunted. Many hunters go to hunt on the first day however, especially those who hunt pink-footed geese.

The first sentence in this paragraph gave me a really hard time for some reason, so it might not be completely right. There are several phrases I’m unsure of. Could bíða með also mean to hold off on something? I think ekki síst literally means not least (of which, perhaps?), but just became especially here. I was also deliberately trying to find some other word besides hunt to use where I chose catching, since I was repeating it so many times 🙂

It also took me a while to figure out andategund…(damn you vowel shifts!), anda coming from önd. You’d think I’d remember that one by now 🙂