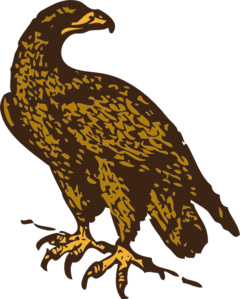 This article on Vísir relates news of a pair of eagles that have come back to a nesting ground on a small island in Breiðafjörður that had previously been vandalized. The destruction happened about a year ago, after the young pair had tried to establish a nest there. It does not seem to have discouraged the birds from returning to the same spot this year however, and the nest will be monitored by local authorities from both sea and land to help protect it.

The word for “eagle pair” in the title is an excellent example of how one class of compound words are formed in Icelandic, and the difficulties they can cause for students. One way to form a compound is to take the genitive singular/plural of the first word and then add the second word. In most cases this involves adding a -s to a masculine noun, or changing a -a to -u in a feminine noun. Some words are tricky however, like the word for eagle, which exhibits one of the interesting vowel shifts in its declension:

You might not find arnarpar in the dictionary if you looked it up, so the first step is to recognize it as a compound. The next hurdle is to realize the first part is in an irregular inflection, and start thinking of words that start with ö. One great thing about the Beygingarlýsing íslensks nútímamáls site is that you can search for any form of a word, and it will likely find the nominative/infinitive form for you.

“Vandalism at an eagle’s nest on an island at the southern end of Breiðafjörður doesn’t appear to have discouraged an eagle pair from trying to nest again in the same spot. A new nest has now been built.”

There seem to be two conjugations for verpa, I’ve listed them both. I can find examples of both being used in reference to nesting or egg laying, so I’m not sure if there is a preferred form or not, or if one imparts a slightly different nuance of meaning. The past participle can be either verpt or orpið.

Representatives from the Western Iceland Nature Society and Bird Protection went to the site to investigate and it was an ugly sight:

“Obvious damage had been done to the nest including pushing it about and throwing parts of it off the cliff down onto the beach. The vandalism was undoubtedly by humans.”

In this section the word hreiðurefnisins is another compound, this time of hreiður (nest) and efni (material). This is a case where the compound is formed by adding the root of the first word (which here happens to be the entire word) to the second word. In all instances remember that the gender of the compound is always determined by the last word, in this case efni.

“At this time there are various parties closely watching the nesting ground from the land and sea. Also the possibility of setting up a monitoring camera in the vicinity of the nest is being considered.”

For an additional challenge, you can read more about Breiðafjörður at the Icelandic Wikipedia 🙂