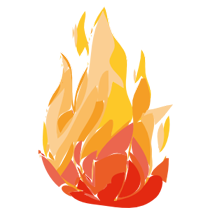 I suppose with this whole “Modernist Cuisine” fad going on it’s hard to know whether explosions aren’t just part of the food preparation, but in this case it was a blocked gas burner that brought the fire department to the Vegamót restaurant in Reykjavík earlier this week.

As reported in this story at Vísir, somehow one of the burners on a stove became obstructed, and when the cook lit another one it caused an explosion that shook the entire restaurant. Fortunately no one was injured, but it sounds like it was pretty scary for the restaurant workers. The verb you will see most frequently (and understandably) in this story is að hlaupa – to run 🙂

“We heard an explosion and ran downstairs, and then the cook came running towards us from the kitchen…”

“I ran and hit the emergency button that shuts off all the gas coming into the building. Then we just ran out and called the fire department.”

Some vocabulary to help you along:

I will definitely check this place out on my next trip 🙂