What The Heck Are Cases? 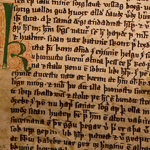 I know I’ve been guilty of neglecting beginners in Icelandic lately, most of the things I post are probably geared at more advanced levels, but in response to an email here’s a post that answers one particular question that is likely to come up when first starting out – what are cases/declensions? The next question would likely be why wasn’t Icelandic kind enough to get rid of them? 🙂

If English is your first language and you’ve never studied a language with cases before, it can seem pretty strange. The words change depending on where they are in a sentence or how they are used? There are some remnants of the case system left in English however, mainly in our personal pronouns (he->him->his). So in order to understand Icelandic cases, it helps to understand a bit about English grammar as well.

The way in which words change in the different grammatical cases is called inflection. In languages with extensive case systems, a word’s inflection indicates it’s role in the sentence, and so things like word order become less strict. In languages without inflections, like English, word order is much more important, and prepositions take over more of the role that case endings played. Let’s look at Icelandic’s four cases, and use our old friend the horse as our example word 🙂

NOMINATIVE
The nominative is the base case, that of a subject; it can be thought of as the uninflected form of the word. This is the form you will find when looking up a word in the dictionary. The simplest sentence you’ll find in Icelandic would be one like

Here the words hestur and epli are the subjects of their sentence, and are in the nominative case.

ACCUSATIVE
The accusative case is the primarily used to indicate the object of the sentence, i.e. something that is being acted upon by a verb. For example

Here horse/apple is the object of the sentence, being acted upon by the verb see/have. As a result, it changes from its nominative form to its accusative form, hest/epli. Epli is a good example of a word that doesn’t change its form in all cases, like this one.

DATIVE
The dative case in Icelandic is probably the one with the most uses. The primary ones are to indicate the direct object of the sentence, and to indicate location, usually with the prepositions í and á.

Ég gaf hesti epli. – I gave an apple to a horse.

Here horse is the indirect object and takes on its dative form hesti, while apple (epli) is the direct object. It also shows how some things that are rendered by a particular case in Icelandic are done with a preposition in English. Anytime you are giving something to someone in English, you use the dative in Icelandic. You could say this differently in English as I gave a horse an apple, without the preposition to. Here the word order determines whether it is needed or not.

GENITIVE
The genitive is primarily the case of possession – in English we can still see this in words like he->his, she->her, and the addition of ‘s.

Þetta er saga hests. – This is a story of a horse.

PERSONAL PRONOUNS
One way to understand cases in English is to see how we use them with personal pronouns. You probably don’t think of I/me/my as the same word in different forms, but as three separate words. You know how to use them without thinking about it, because you’ve completely internalized the grammar. The challenge is learning to do the same thing in a foreign language.

You could do a similar exercise to the above to see the similarity between English and Icelandic when it comes to personal pronouns:

* This isn’t a different case, but the definite article form of epli, which is required for possessive constructions. But that’s another story 🙂

PREPOSITIONS
The other place where cases come into play is with prepositions. Certain prepositions govern a particular case, and in some cases they can govern two depending on the context (location vs motion). There is no general rule, you just have to learn which prepositions go with which cases, and apply them accordingly.

I hope this at least helps to demystify cases and declensions. They are not anything exotic or scary, they are simply ways of expressing grammar. Once you see how cases still exist in English, even in a limited form, it makes it easier to understand how they work in Icelandic. It’s just that many more words inflect in Icelandic than in English 🙂