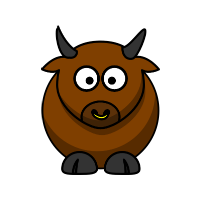 It’s the slaughtering season in Iceland, and a bull calf from the North weighed in at 553 kilos when it was taken for slaughter, the largest to date. That works out to about 3,000 hamburgers according to the Norðlenska web site 🙂

I have to admit, I’m not a vegetarian, and can’t wait to get back to Iceland to enjoy the amazing meat, fish and dairy products there. And by dairy products I mostly mean skyr 🙂

A two year old calf from Breiðaból in Svalbarðsströnd was well over half a ton in weight when he was led to slaughter at Nordlenska recently. A heavier animal has never before crossed the great river there in the north.

If you’ve never noticed, ages are sometimes given in “winters” rather than years, thus this “tveggja vetra” calf. I think it’s mainly with some animals, not sure about people 🙂

A little confused by the last sentence, it may be completely off. I’m not sure if it might be a reference to the trip from Breiðaból to the slaughterhouse in Akureyri. I think móða could also mean divide rather than river.

The bull weighed 553 kilos and the ground meat from it would be enough for 3,000 hamburgers, according to Nordlenska’s website. The bull itself ate mainly hay, but corn is added to the fodder at Breidbol the last month before slaughter.

The word vó stuck out when I was first reading the article, and I couldn’t remember learning the verb vega before. It has an interesting conjugation, as does éta:

It’s worth mentioning that the great Guttormur, who delighted guests at the petting zoo in Reykjavik, was 942 kilos at his heaviest in 2001. However he was buried in the pet cemetery in Kjós.

Another phrase that seemed new to me was the verb að geta + genitive meaning to mention. This is why you see þess here.