At the request of a fellow Icelandic learner from Seattle, I set out on a quest today to obtain a coffee mug. But not just any coffee mug, this one is being sold by the capital area police (Lögreglan á höfuðborgarsvæðinu) and features Síbrotamaðurinn, a habitual criminal / repeat offender 🙂

So another opportunity to use some Icelandic! After walking all the way down Laugavegur to Snorrabraut, the next street down is where the police headquarters is. I walked in, and after waiting a bit for the people in front of me to finish (they apparently had actual problems beyond poor grammar) I walked up to the window and asked for the mugs, something along the lines of Ég ætla að fá tvo þessa kaffibolla, except I think I said þennan by mistake, and now that I think of it maybe it should be tvo af þessum bollum or something along those lines. Anyway, I got the mugs, and the woman behind the glass seemed amused 🙂 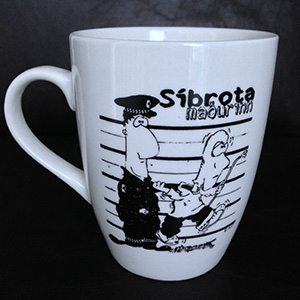 Back to síbrotamaðurinn, the main thing to note is sí-, a prefix that in some words adds the idea of habitual or continuous, ever- or always. Some examples are:

And brot is a word with a few meanings, one of which is violation, as in breaking a law.

After a lot of walking on a cold but mercifully windless day in Reykjavik, my other small success was in ordering lunch at Fish on Skólavörðustígur…just tvær fiskisúpur, but for me this is progress 🙂