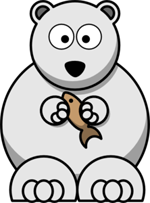 Polar bears have been known to show up in Iceland on rare occasions, usually on an ice floe from Greenland, and every now and then police are called out to investigate a reported sighting. Last summer a search took place after Italian tourists reported seeing a polar bear near Vatnsnes. Usually they find nothing, but sometimes, at least in this case, they find sheep. Who knows…maybe the light plays tricks on you in Svínadalur, and from the right distance, at the right time of day… 🙂

“Police assistance was requested shortly before eleven o’clock in the morning when two polar bears were seen in Svinadalur in the vicinity of the town. Residents of a nearby town had seen the animals and followed them for a while, but they were some distance from the town.”

You might recognize the verb að reyna in the title as meaning to try, attempt – in its reflexive form it means to turn out, prove to be:

In the phrase laust fyrir klukkan ellefu, the adjective laus is being used like an adverb with the meaning shortly – it could also be used with eftir to mean shortly after something.

“However when police showed up it became clear they were talking about two sheep, snow-white in color. According to the officer on duty in Borgarnes the sheep had lost their way from their home pasture, but were fine in all other respects.”

I hadn’t seen the expression bera að garði before, but bera is one of those verbs that has so many uses I’m sure I’ve only seen a fraction of them. There is another example of the difference in meaning that a verb takes on in its reflexive form, here að villast means to get lost, lose one’s way. On the other hand, að villa means to mislead, lead astray.