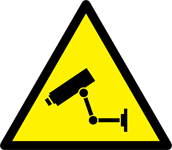 A police car from Akureyri was broken into, and the film from a camera used to catch speeders was stolen. The theory is that the thief had been caught speeding and was trying to destroy the evidence. No word on whether any security camera filmed the break-in 🙂

Film from a police speed camera in Akureyri was stolen Saturday. The camera was in an unmarked police car left unattended in the town of Skogar in Þelamörk.

Triple compounds, always fun 🙂 Here there are two variations on the word for camera – mynda·vél. This word itself is a compound of the words for picture and machine. When prefixed with eftirlits- it becomes security camera. Here even the prefix is a compound, from eftir·lit – supervision. In the case of hraða·myndavél, the prefix comes from hraði – speed – and refers to cameras to catch speeders.

When the car was checked Saturday night, it became apparent that someone had broken a window in the car, reached in and taken the film from the camera. Likely the thief was speeding and wanted to destroy all the evidence.

It’s past participles everywhere in this paragraph 🙂 Usually seeing words like hafði and hafi give you a clue that it’s coming, and here they are followed by brotið, teygt, tekið, ekið and viljað.

Note that að spilla takes the dative, which is apparent from öllum sönnunargögnum, dative of öll sönnunargögn.