Months Of The Year 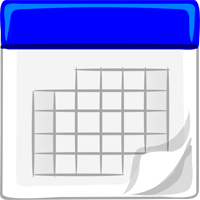 The months of the year in Icelandic will likely look familiar, as they are similar to English and other related languages. They are easy to learn and work with since they do not change form (decline), but remain in the same form as you see them in the nominative case. Just as the days of the week are not capitalized in Icelandic, neither are the names of the months. Let’s look at the months themselves and then how to use them in expressing dates:

To talk about which day of the month it is, or on what day something is happening, we need numbers 🙂 But not just any numbers, ordinal numbers (raðtölur)! (First, second, third, etc.) To keep it simple we’ll just look at the ones we need to express dates:

So now you are all set to answer the question:

Just as in the post about the days of the week, you can construct a very simple drill to learn not only all of the months of the year but also all of the ordinal numbers from 1 to 31, using the following:

When you want to say that something happens/happened on a particular date, you put the ordinal number in the accusative case. Since ordinals decline like weak adjectives, you just need to change the -i ending to -a. The only exception is annar, which becomes annan.