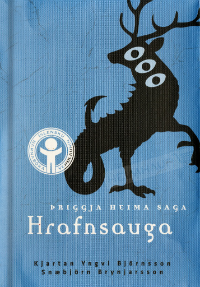 I recently finished the book Hrafnsauga, which makes it the first Icelandic book I’ve read cover to cover 🙂 I chose it initially because it was aimed at young adults, and I thought it might be a bit easier to read for someone at my level. I ended up being right about that, but it also turned out to be a really good book!

The story is an adventure/fantasy, similar to the Lord of the Rings trilogy, or possibly even closer to the His Dark Materials trilogy by Philip Pullman. If you’re an intermediate student of Icelandic, and like these types of stories, this would be a great book to pick up. In addition, it was chosen Besta íslenska táningabókin (Best teen book) in 2012 🙂

Here’s the teaser from the back cover:

Almost a thousand years have passed since the dark ages came to an end, when the seven sages came together and defeated the shadows. That dark period has mostly been forgotten. But although man’s memory may fade, those ancient forces forget nothing.

Now I can’t claim to have understood every word in the book, or even every sentence, but I was able to follow the story very well. This leads into a discussion of learning strategies, which can vary from person to person, especially when you are mainly learning on your own. At first I wanted to look up every word I didn’t know, but after a while that gets tedious. Eventually I realized it’s ok to not get every single word – get what you can on your own, a bit more on a second read, some things from context, and then look up maybe 5 or so words per page. Then move on. I’ve learned not to get too bogged down trying to look up everything. If it’s a common word, you’ll run into it again 🙂 This is pretty much what my book-reading strategy has evolved into, but do what works best for you.

This book is just the first in a trilogy, and the second book should be out very soon, definitely in time for this year’s jólabókaflóð 😀