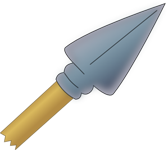 Sometimes it just takes one word to send you off on a linguistic journey – in this case it led me to the origins of the English word odd, which of course has something to do with Icelandic as well 🙂

What actually started this whole thing was the word oddbrotinn – I came across it while reading a short story (smásaga) called Hylurinn in the book Gula húsið, by Gyrðir Elíasson. I really like the stories in this collection that I’ve read so far, and they truly are short stories, maybe 3-5 pages each, which is perfect for someone learning the language. Trying to read an entire novel can be daunting, but a short story can be worked through in a couple of hours. The prose is also not too difficult, so if you’re an intermediate student like me looking for a new challenge, I can recommend this book or another of his collections of short stories, Milli trjánna.

The story Hylurinn is about a father and son who are fishing in a river. The father is actually using a spear, throwing it into the deep part of the river (hylur) trying to spear a fish. The passage was:

“The man looked out at the spot in the river. Then he threw for a third time. The spear landed in the rocks. When he pulled the staff out the spear tip was broken off.”

I knew brotinn meant that something was broken, but I wasn’t sure what odd meant. I found the word oddur:

The word broddstafur had come earlier in the story, but I hadn’t looked it up yet, figuring it was a staff of some sort; it turns out that one meaning for broddur is similar to oddur (point, spike). Another meaning of broddstafur is a letter with an accent on it (á, é), but context should rarely make this confusing 🙂

The word bogi means arc or curve, so combining it with odd give the word for a Gothic arch, which has a point-like shape:

There is also the adjective odd·mjór, which means pointed. By itself, mjór means thin or narrow, so it’s interesting to see how the meaning changes with the prefix.

A more abstract idea related to point would be that of head or primary; prominence . This seems to be the idea in the word odd·viti, a chairman or representative.

So in looking up the meaning of odd- in an Icelandic word, I found its relation to the English word odd, which has a long history going back through Old Norse, Old English and even Old High German, and probably whatever came before that. According to various dictionaries, the origin is:

I’ve only dabbled in Old English (Anglo-Saxon), but the ties it shares with Old Norse are immediately recognizable, and for a speaker of English it makes learning Icelandic even more fascinating 🙂