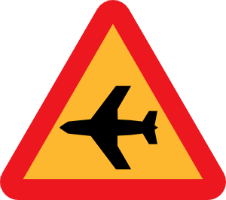 A small airplane used for flight instruction was forced to make an emergency landing yesterday on a road in Kjóastaðir after a warning indicator went off. Fortunately no one was injured, and a tow truck came along to haul the plane away.

It’s a pretty short article, and not too difficult a read – my favorite 🙂

A small two-seat airplane made a forced landing on Biskupstungnabraut in Kjóastaðir just before noon today. The plane is used for instruction at the Keilir flight academy – two were on board but no one was injured.

I went with the dictionary definition here and said forced landing, but in circumstances like this emergency landing still sounds more natural in English. There is a word neyðarlending that seems to mean emergency landing, but might be for a different situation. Some other types of landings you might encounter – milli·lending (stopover) and brot·lending (crash) 🙂

A reminder about the use of the genitive appears in the first sentence – so if it were a four-seat plane, it would be a…fjögurra sæta flugvél 🙂

The plane was forced to land after a warning light went on. Regulations in that case require an immediate forced landing, in the interest of caution. The landing was completely successful. Investigators from the Icelandic Aircraft Accident Investigation Board are on site taking a report from the pilots. The airplane is still on the road and the lane from Gullfoss is closed, but a tow truck is on the way to remove it. Motorists are asked to use caution while driving in the area.

I wasn’t totally sure about the phrase í varúðarskyni – mainly what meaning skyn adds to a word. It seems to mean a sense of, or for the purpose of. I found a couple other examples that make me think my translation is ok: