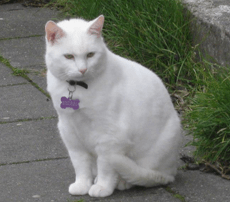 If you’re a cat person, Reykjavík is your town. I remember on our first trip to Iceland sitting in the dining room of the hotel having breakfast, looking out at the streets filled with snow on a late-December morning…and seeing a cat just walking around like it was nothing. I think he gave a car a dirty look as it slid along the icy street. I guess everything that has managed to survive on that island for the past 1000 years has had to become tough, even the cats 🙂 Heck, just last September there was a blizzard in northern Iceland that buried hundreds of sheep in the snow, and they were still finding them – alive – after several weeks and months. So yeah, the sheep too…

From RÚV, we learn of Snati the Icelandic wonder cat, who survived a fall from a 6th floor window…

“Snati the cat will need to walk with splints the next few weeks after he fell out of a window, and down six stories onto a concrete stairway. Veterinarians said it was unbelievable that he survived the fall.”

Some vocabulary from the story:

The declension of köttur is all over the place 🙂

The most obvious verb to take away is:

One phrase that is pretty common with detta is detta í hug (to occur to someone, to think of something, get the idea in one’s head), an impersonal expression which takes the dative: 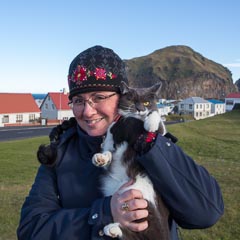 And this is Mary holding Jaki, the coolest cat in Heimaey, whom we met on a trip to Vestmannaeyjar. Jaki was following some girl to school it seemed, but I don’t think she was his owner as she wasn’t really paying him much attention, and then muttered something in Icelandic that I didn’t understand. 🙂 We spent the rest of the day in Heimaey, and I swear as we were leaving for the airport we saw him again on the street somewhere else!

And just one final cat reference – if you happen to be wandering down Austurstræti there’s a vintage clothing store called Gyllti kötturinn. My wife found a great pair of boots there 🙂