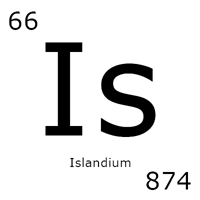 Even if chemistry was never your best subject, some knowledge of the elements and their names will come up while studying a foreign language. I got it in my head to explore of few of the more common terms related to chemistry, and some of the Icelandic words one might encounter that are derived from them.

There’s a great page that has the Periodic Table in Icelandic, in addition to many other languages, with links to Wikipedia where you can see information on all of the elements. The foundational word for this topic is most likely efni (matter) – it will appear in several forms. Also common is the word eind – particle.

From this comes the word for chemistry itself – efnafræði. It also serves as the ending for many of the element names. A few vocabulary words:

Vetni – Hydrogen
The most basic element, I believe the name comes from the same root as water (vatn), just with a vowel shift thrown in.

Kolefni – Carbon
It’s not hard to see the connection between carbon and the word for coal (kol).

I don’t know if it’s related to the same root, but there are a couple of words (mainly negative it seems) where the prefix kol- is used as an intensifier:

Súrefni – Oxygen
If you’re a fan of breathing, you’re familiar with our next element. In order to understand where the Icelandic word comes from you have to explore the root of the prefix oxy-, which derives from a Greek root for sharp, acidic. So we find in Icelandic súr – sour, acidic.

Ál – Aluminum
You will surely come across the word for aluminum at some point in your study of Icelandic, as there are several smelting plants in Iceland which take advantage of the geo- and hydro- power there. Mainly you will read about the controversy surrounding these plants as it relates to pollution and the threat to Iceland’s environment.

Brennisteinn – Sulfur
If you’ve been to Iceland you’ve surely come to love the smell of sulfur! Perhaps brennisteinn doesn’t look like sulfur…but what if I said brimstone?! 🙂

Járn – Iron
As you might expect there are many iron words 🙂