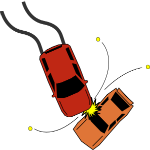 A short article about a minor traffic accident near the Kringlan mall in Reykjavik yesterday contained several interesting vocabulary words. Nobody was seriously hurt, and it sounds like some fence got the worst of it. It’s not too difficult a read, and I looked up almost all of the words, so go for it!

An accident occurred on Miklubraut at the intersection with Kringlumýrarbraut just before 5pm today. A passenger car drove off the road onto the median between roads and crashed into the fencing.

This is another article where both verbs for drive are seen – aka and keyra. Remember that aka takes the dative case, and keyra the accusative.

You see the word mót (meeting, gathering) a lot in words where it indicates the end of something, but the literal meaning is where things meet. Good examples are

So it basically means the time when the month/year/century meet, which could be thought of as the end of one or the beginning of the next. In this article we find the word gatna·mót – the place where the streets meet….so…intersection 🙂

The car was driving west but the events leading up to the accident are unclear. One person was taken to the emergency room, but according to the fire department in Reykjavik his injuries are minor.

The word vesturátt is interesting – there seem to be similar words with átt for each compass direction, but also a variant using the -an (motion from) adverbial form that takes on the meaning of a wind blowing from that direction:

According the the BÍN site, minniháttar is often written as two separate words – minni háttar. Also, it looks like it doesn’t decline.