A Horse Of Course 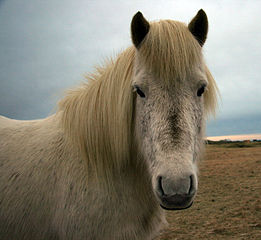 One aspect of language learning that people either love or hate is grammar. I happen to enjoy grammar 🙂 The biggest difference between Icelandic and other Nordic languages is the fact that is has preserved its inflectional characteristics over the centuries, while other related languages have lost them. So you can’t avoid dealing with declensions of nouns and adjectives, or conjugations of verbs. The sooner you start the better, and like any task it’s easiest when you break it into smaller pieces. This is the first in what should be many posts about a very specific part of Icelandic grammar. I will generally follow the classifications in the Einarsson book, so you can always refer to that for even more detail. Here we will look at a single class of what are called strong masculine nouns, one of the most basic and common:

Strong masculine nouns like hestur are distinguished by having a genitive singular ending in -s or -ar, and nominative plural in -ar. One anomaly is that the -i ending in the dative singular is sometimes missing. Not all nouns in this class end in -ur, however. Other endings are -l, -n and -r. For instance:

which is one of type where the -i ending does not appear in the dative singular.

An example on a -n noun:

læknir is a bit special in that the i can be considered part of the root:

There isn’t a ton of value in simply memorizing declensions; it’s much better to have some context to make it stick and be more natural in your mind. Actual sentences are best – they don’t even need to be complicated sentences, just something complete that uses the word in that particular case:

Þetta er hestur. – This is a horse.
Þetta eru hestar. – These are horses.
Ég sé hest. – I see a horse.
Þau lesa bók um hesta. – They are reading a book about horses.
Hún féll af hesti. – She fell off a horse.
Við stöndum hjá hestum. – We are standing beside horses.
Makki hests er síður. – A horse’s mane is long.
Hann er milli hesta. – He is between horses (in the middle of a group of horses).

It’s not always easy to come up with examples, and it’s ok if they are a bit silly or contrived 🙂 It’s still good practice to try. For much more information on this class of nouns check out Einarsson In. I,2